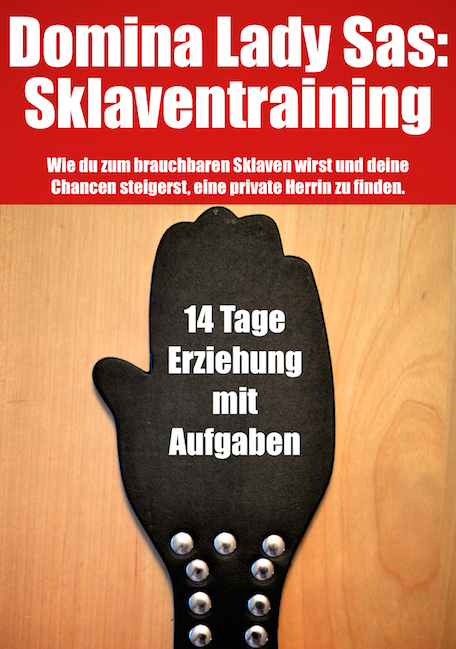 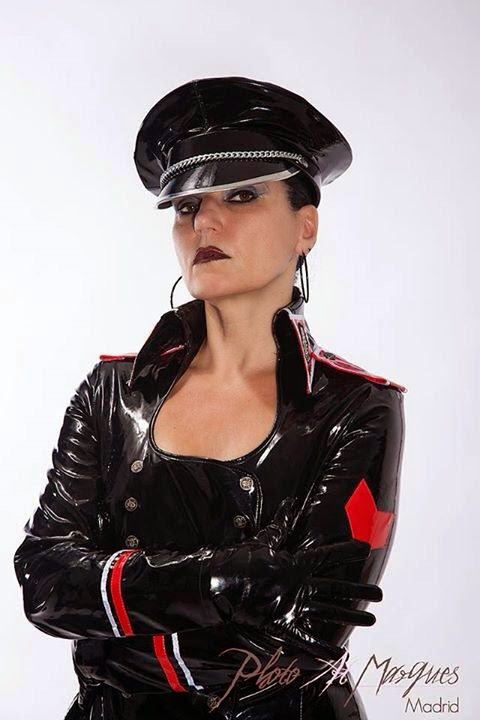 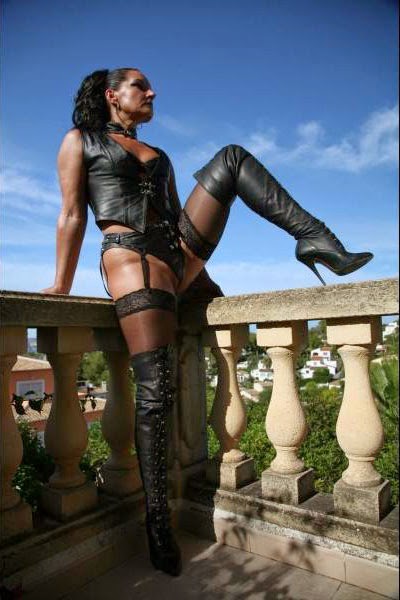 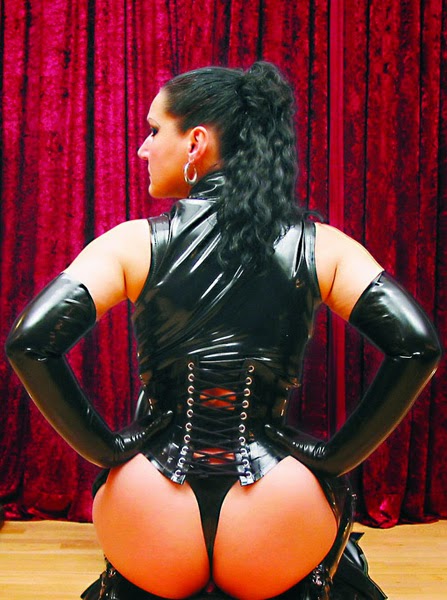 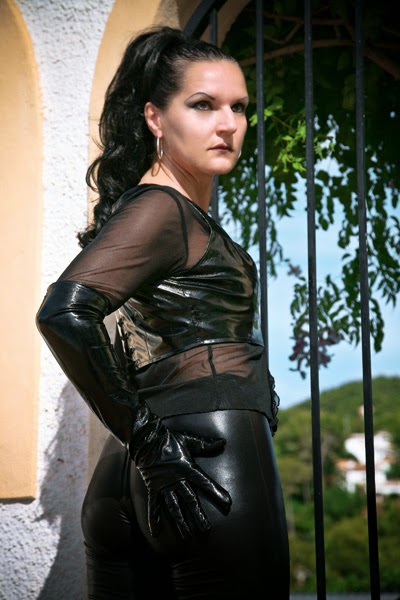 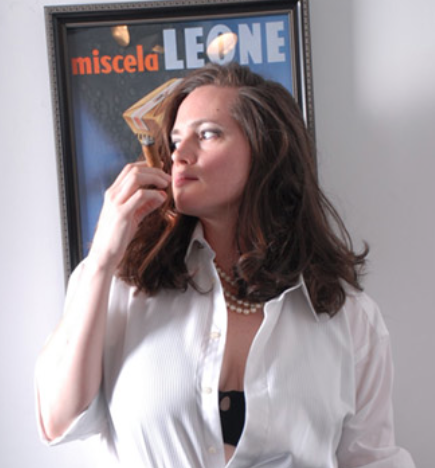 
Lady Sas: Dear Veronica, please describe the BDSM scene in New York a bit for us.
Mistress Veronica: I am unsure what the lifestyle scene is like in NY anymore.  When I first started nine years ago, it was non-existent except for Paddles, which has been around for thirty years or more. There was also a goth party where they had a little platform for people to play - it was mostly light stuff like flogging and spanking. Now the market is saturated I believe, and there are many parties. The trend has moved away from static places like clubs where everyone goes, to themed events that may be in one place one week and another the next. I have never really liked "the scene", as in my experience it is dominated by male doms and I don't really want to look at that. I had my own party for awhile, where my girl gang would attack the guys who showed up.  It was quite fun, but a lot of work and I am in school now, so cannot run it any longer.  We were called The Violent Fems, maybe you've heard of us!?

Lady Sas: Why are these games so fascinating to you?
Mistress Veronica: I think they were fascinating when I was inexperienced because they were a sort of dark mystery I wanted to solve. Now I'm interested in them more from an armchair psychologist point of view. To observe how people's various fantasies can be a catharsis, a secret, a guilty pleasure, an obsession, or a healthy outlet.  Or everything all together. The contradictory nature of people's predilections and the conflicted relationship people have with them and also themselves is one fascination I have.  I guess I am more fascinated with talking them through it and owning their fantasies, although those sorts of conversations are usually only with clients who I am quite close to.

Lady Sas: Did your job as a Dominatrix change you as a person in a way?
Mistress Veronica: Yes, it has made me a great reader of people and their motivations.  It has also made me far less judgmental about people's various fetishes and the reasons behind them. In the past I may have chalked some things up to a troubled childhood, but now I think that is a very one-dimensional, flippant point of view.  I also think it has contributed to making me a stronger person and a more committed feminist (although I know how unpopular that term is). 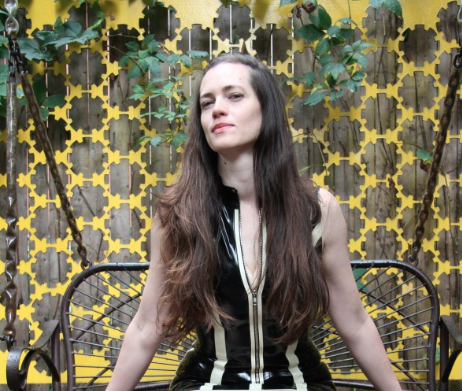 Lady Sas: What was the most surprising scene you can remember from a session?
Mistress Veronica: There are two that come immediately to mind.  One, when I first became an independent mistress, was with a client who was into very casual cross dressing.  Panties, stockings and the like.  I then wondered what it would be like to dress him completely in my clothing and put lipstick on him, so I did, and he broke down and cried.  I kind of took a gamble, because I didn't know if he wanted such a complete transformation, but it seems like he needed a reaffirmation that he was a cross dresser or trans, or something.  I never heard from him again.  I hope he took that experience and became more comfortable with himself.
The second is probably the moment a client of mine and I realized he is a true sexual masochist.  He literally comes just from pain.  That was amazing and hilarious.  He loves to construct scary looking implements for me-- floggers with nails, a screw that acts as an electrified sound (for urethral insertion)-- just insanely painful stuff.  He's very fun, and I am very fond of him.

Lady Sas: What inspires you? How do you come up with new ideas for sessions?
Mistress Veronica: I get inspired when the other person is excited and we have a good chemistry. When I have someone's complete trust and they want me to do whatever I want with few limitations. Looking in people's eyes when I know they are experiencing something that's been in their mind forever and are finally making a reality. Punching, kicking, and generally showing off to martial arts enthusiasts is also really great. 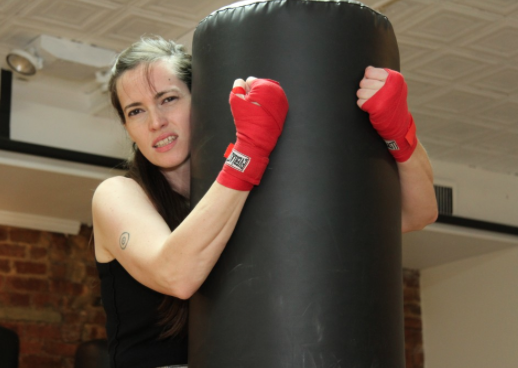 Lady Sas: I think NY is an amazing city. I've been there for a couple of days as a tourist. So I have to ask this: How is life in New York from your point of view?
Mistress Veronica: NY is a beautiful struggle.


Lady Sas: Thank you very much for your time! 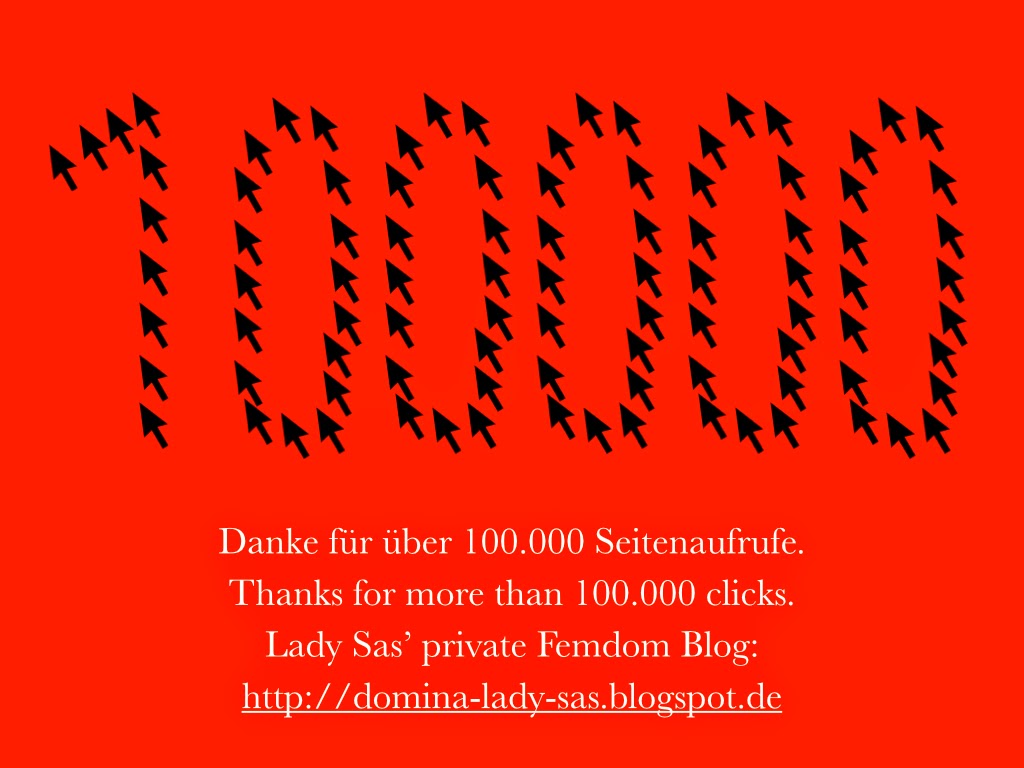 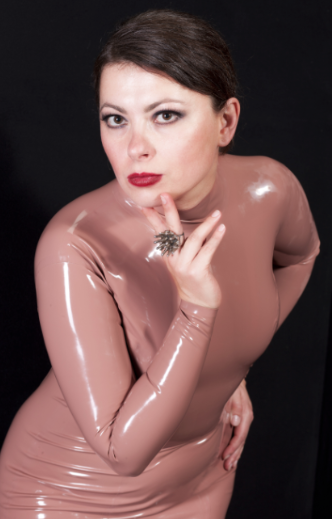 
Lady Sas: Most people are busy with one project. But you have several at once. What drives you? Where do you get your passion to pursue so many interests?
Violetta Stahl: Naturally, you need to see the individual projects on context. There are many overlaps between them. This certainly makes their large number more manageable. My projects complement each other and in combination, they paint a single picture of how I live my passion for BDSM — both professionally and in private. Ever since I first discovered my dominant side, I’ve wanted to explore more of the kinky world each day. But the world of kink also grows through the passions and dreams that we share with others, the thoughts and experiences we exchange, and the inspiration we give. Just as I have been inspired by others, so also I would like to inspire people to live their kinky desires. In living out our desires, we must always be conscious that we’re interacting with other people, who are as diverse as humanity itself: in their wishes, their passions, their dreams, their desires. The greatest form of pleasure for one person might be trivial or even a turn-off for others. My desire to communicate with other people is just as important as my desire to live out my passion. As a Dominatrix, I am privileged to practice my dream profession, and have created my own play-space in an independent environment that I use for my sessions but also in order to inspire others with my passion. In this space, every lady who participates in my workshops and seminars can explore and develop her own personal preferences in a sheltered environment. Additional elements such as arranging slaves and practice pets, and play parties in intimate settings offer an opportunity to dive deeper into the kinky world, explore the full range of possible play and overcome any inhibitions.


Lady Sas: You worked in marketing for fifteen years: Does this background help you in your projects?
Violetta Stahl: My professional background is a key foundation for my business activities — if you don’t limit marketing to advertising or sales support, but see it more broadly as an integrative aspect of managing a company. Many participants in my seminars set up their own business as a way of relaunching their career or reorienting themselves professionally or building up an additional source of income. My background as a marketing coach combined with my experience as a Dominatrix are at the centre of the value proposition that I offer in my projects. 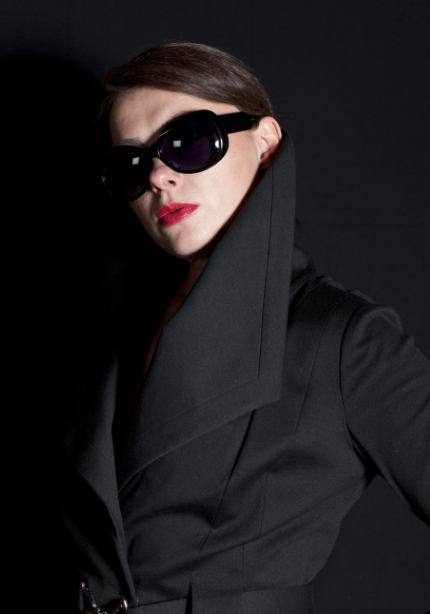 
Lady Sas: What are the most common “beginner’s mistakes” that you observe in your trainee Dommes?
Violetta Stahl: There isn’t really a typical beginner’s mistake. As with most pursuits in life, you need to stay dedicated. Those who’ve had a first taste and want to live out their passion should pursue this path, to find out where their personal interests lie and try to explore what they enjoy most. It’s true that curiosity is often restrained by understandable inhibitions. That’s why it’s always important to remember that your play partner is another human being. We are all different, and have our own personal preferences, fetishes and taboos. An activity that doesn’t really work with one play partner could, with a different partner, trigger an emotional and erotic firework! Perhaps because there’s a better alignment of fetishes and preferences. For this reason, it’s always important to talk before playing. If you can find out the other person’s likes, dreams and fantasies, as well as his or her limits, you’ve already set the foundation for an enjoyable play. And during your play, you can also build an atmosphere of trust by communicating and sharing feedback with your partner, so both can live out their passion. 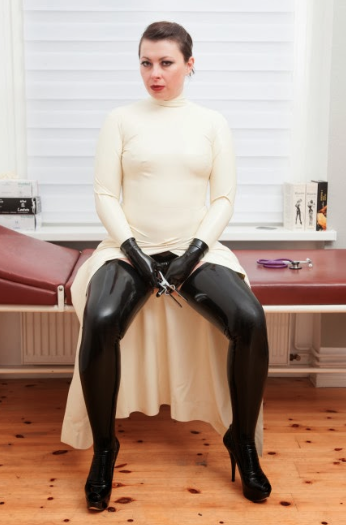 Lady Sas: Du you have any advice for young Dommes who are just starting out or for women who have newly discovered a passion for dominance?
Violetta Stahl: If you’re curious, then you shouldn’t shy away from taking the first step. To try out what is possible and explore your own preferences. Every play, whether in private or in a professional session, offers new inspiration and teaches you more about the game of domination as well as about your play partners. But most of all about yourself.

Lady Sas: Dear Violetta, thank you so much for your interesting answers.


For more information on projects by Violetta Stahl, click here. 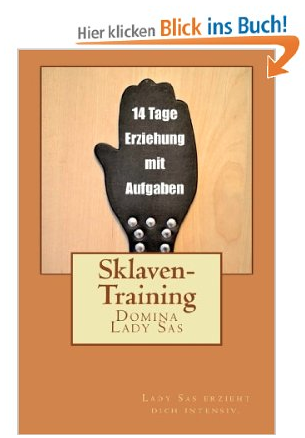 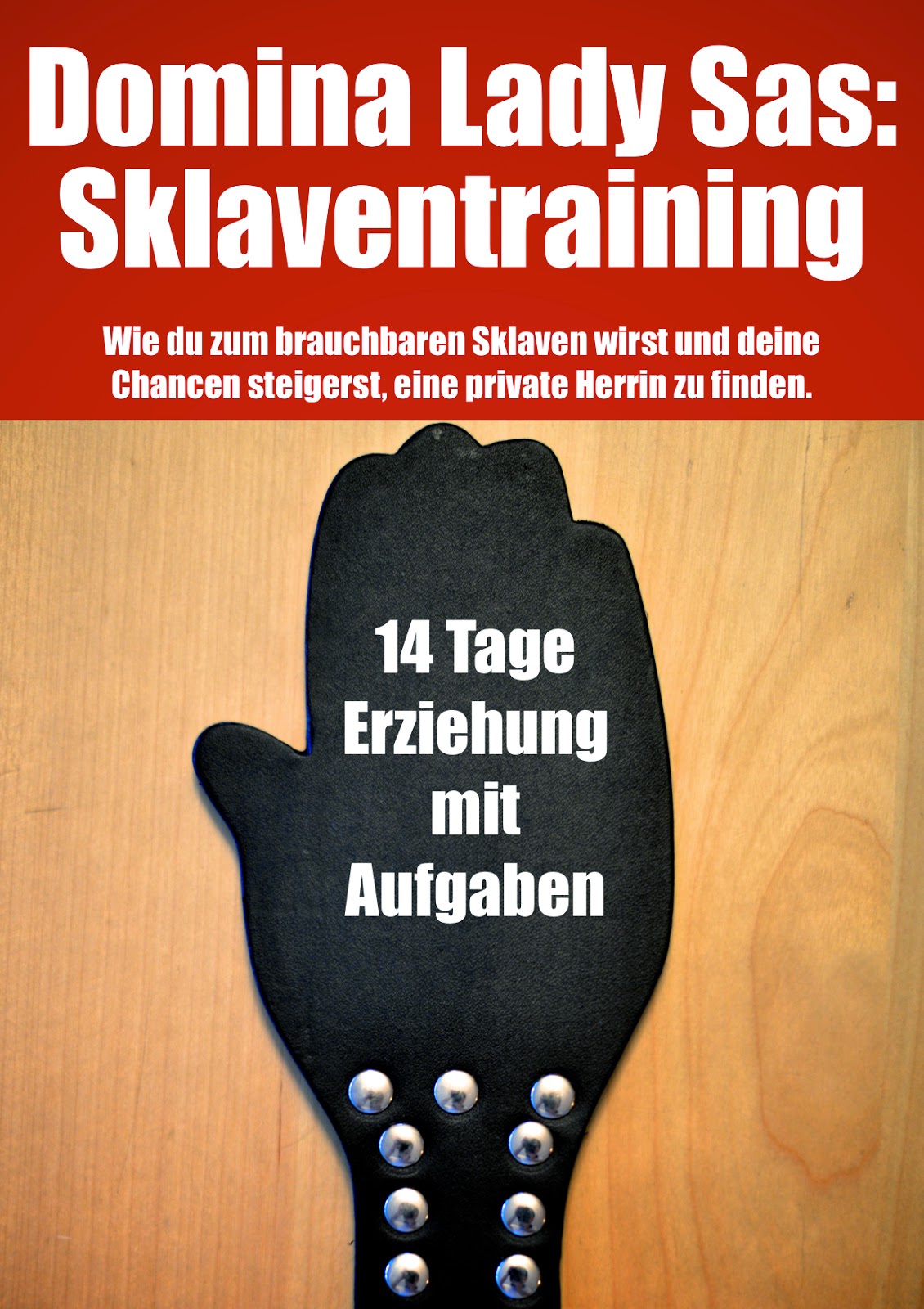 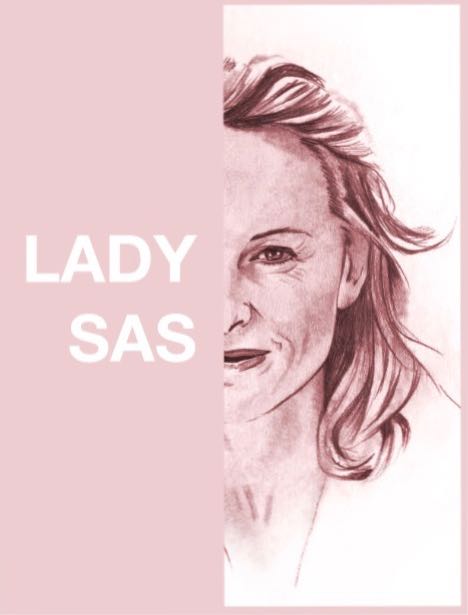 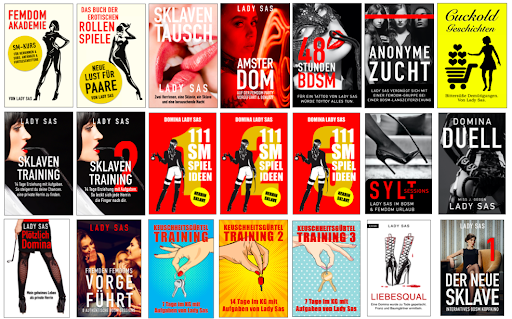 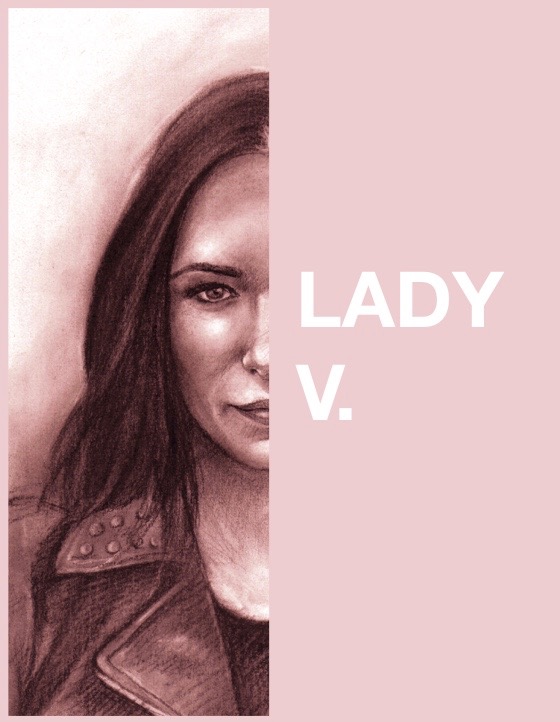 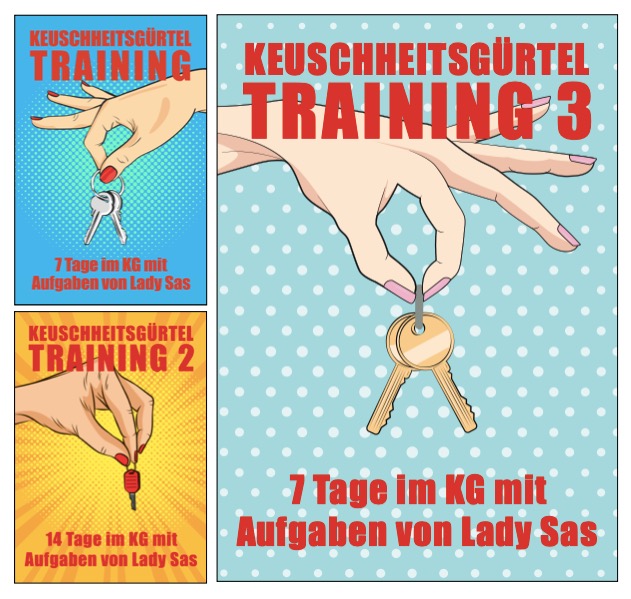 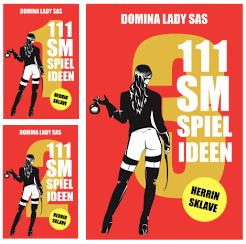 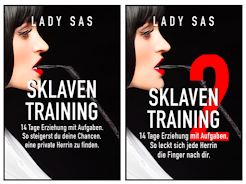